You are here: Home / About

I struggle with productivity, personal discipline, and especially procrastination.  This site documents my efforts to sort my shit out. Something here might help you, or perhaps you can help me.

Also, at the start of this whole thing, I’m a fat guy.  As things move along, I’d like to be less of a fat guy.

Whatever, Tubby.  What’s the Plan for SaveJohn.com?

I’ll post articles and resources related to my goal to unfuck myself. There’s going to be stuff on productivity, project/life management, habits, health & fitness, and more. I’ll let you know what’s working for me and what isn’t.  I’ll probably also use this site to pick the brains of folks who are smarter than me and report those conversations here.

I avoid new age, saccharine spiritual, or woo-woo content. That crap doesn’t hold water for me.  I’m looking for street-level, actionable, and realistic solutions that require no crystals or burning of sage.

In 2002, I read about the first successful cyber-begging site (SaveKaryn.com via Wikipedia) with great interest.  The power of the Internet to bring this woman’s controversial efforts to get out of debt (via asking the planet for donations) to a world audience fascinated me. Following her story, there were legions of copycat sites. I’d say almost all of them failed compared to Karyn’s site. That said, it occurred to me that there might be a time when I would need some saving.  I discovered that the “SaveJohn.com” domain was available and I grabbed it.  The original plan was to keep this domain name in cold storage until that day arrived and then I could fire it up as a part of a “Hail Mary” effort, if need be.

When I decided to start a personal development website, I spent a ton of time searching for a good domain name. As it turns out, the domain name carcass has been picked pretty clean, especially on this topic. It then occurred to me that I already had a perfectly good domain name in the form of SaveJohn.com.

Though I’m not struggling with something as tragic as cancer or a crippling accident, I am making an effort to fix (i.e. save…) myself.

… because I also figure that if I do get the cancer someday, then I’ll already have this site set up with an established audience.

Just trying to stay one step ahead. 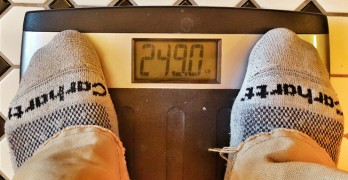